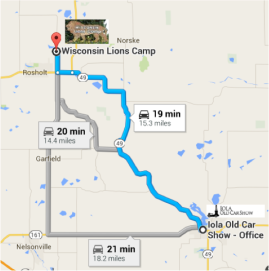 If you’re a fan of collector cars, you’re more than likely familiar with the Iola Car Show. If not, you may not know that the Wisconsin Lions Camp and Lions Pride Office is only 15 miles away from one of the largest car shows in the United States.

Although Iola is populated by approximately 1,200 people 51 weeks out of the year, during car show weekend, the count skyrockets up to 125,000 people. To say that it that it takes a village to run the show would be an under exaggeration; it takes multiple communities to make the show a success, including the Iola Lions Club. Although the show has become famous all across the country, it actually had a very modest beginning.

In 1972, Chet Krause, founder of Krause Publications (now a division of F+W Media) and Cliff Mishler, former president of Krause Publications, were both actively involved in the Iola Lions Club. Each year, they sponsored a chicken and pork chop dinner to raise money for the club and their community.

Previously, Krause Publication had been successful in producing publications for coin collectors and thought they could do the same for car enthusiasts so they started Old Cars Weekly. In an attempt to get more local people involved in the hobby, they invited friends who owned old cars to the dinner. They thought the cars might increase attendance and raise more money for the Lions Club. You could say that the event was a success.

Today, the Iola Car Show remains a community event. Throughout the years, it has been estimated that the show has brought in upwards of $8 million to the community and charity organizations. The Iola Lions Club continues to volunteer year after year in concessions.

If you have a passion for old cars or are just looking for something to do with this weekend, you won’t want to miss the 2015 Iola Car Show. While you are there, be sure to say ‘hi’ to your fellow Lions and Lionesses and thank for their dedication to their community and our organization.

From all of us here at Lions Pride, happy Car Show Weekend!