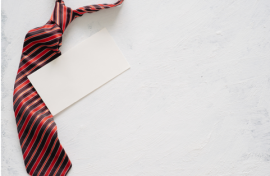 Think about the last show you watched on TV. Do you remember any of the commercials? More than likely, it was something related to home improvements, gadgets or men’s clothing, which can only mean Father’s Day is near. This week, we thought we’d celebrate dear old dad with a short history lesson and a few popular gift ideas, so let’s get started!

Believe it or not, the inspiration for the Father’s Day was Mother’s Day. A common story recounts that the creator of the event was named Sonora Smart Dodd. One Sunday morning, the young woman was listening to a church sermon about Mother’s Day when we thought that her father was equally deserving of a day filled with praise.

Her father, William Smart was a Civil War veteran and widower. Sadly, his wife died while giving birth to their sixth child. William went on to raise his children on a small family farm in Washington. Sonora wanted to show her appreciation for William love and support with a day dedicated for him and other dads around the world. The first Father’s Day was celebrated on June 19, 1910.

For the next half-century, Father’s Day was celebrated at a local level in communities around the United States. In 1966, Lyndon B. Johnson designated the third Sunday in June as the official Father’s Day, but it was officially recognized as a national holiday until the Nixon administration in 1972.

Today, children all around the world celebrate their dad with fun gift ideas. The most common presents are as follows (courtesy of MarketWatch):

With Father’s Day only three days away, there isn’t much time to find the perfect gift! If you are still searching for a thoughtful, meaningful gift, consider donating to Lions Pride in honor or memory of your father. Your gift will work to help preserve, protect and provide for Wisconsin Lions Camp and all WLF statewide projects.

There’s an unofficial holiday up this weekend, and we’re glad it’s landed on a Saturday.

National Beer Day is taking place on April 7. The observation marks the day that the Cullen-Harrison Act was enacted. President Franklin Delano Roosevelt signed the law in 1933, which made buying, selling and drinking beer and wine legal for the first time since Prohibition in 1920. After putting his name on the law, FDR reportedly said, “This is a good time to have a beer.”

Since it is only Thursday, we thought the best way to celebrate early was with fun facts about beer (we can celebrate with a glass the day of!)

If you plan to celebrate the occasion this weekend, please remember to do so responsibly. From all of us at Lions Pride, we’d like to wish a safe and enjoyable weekend.